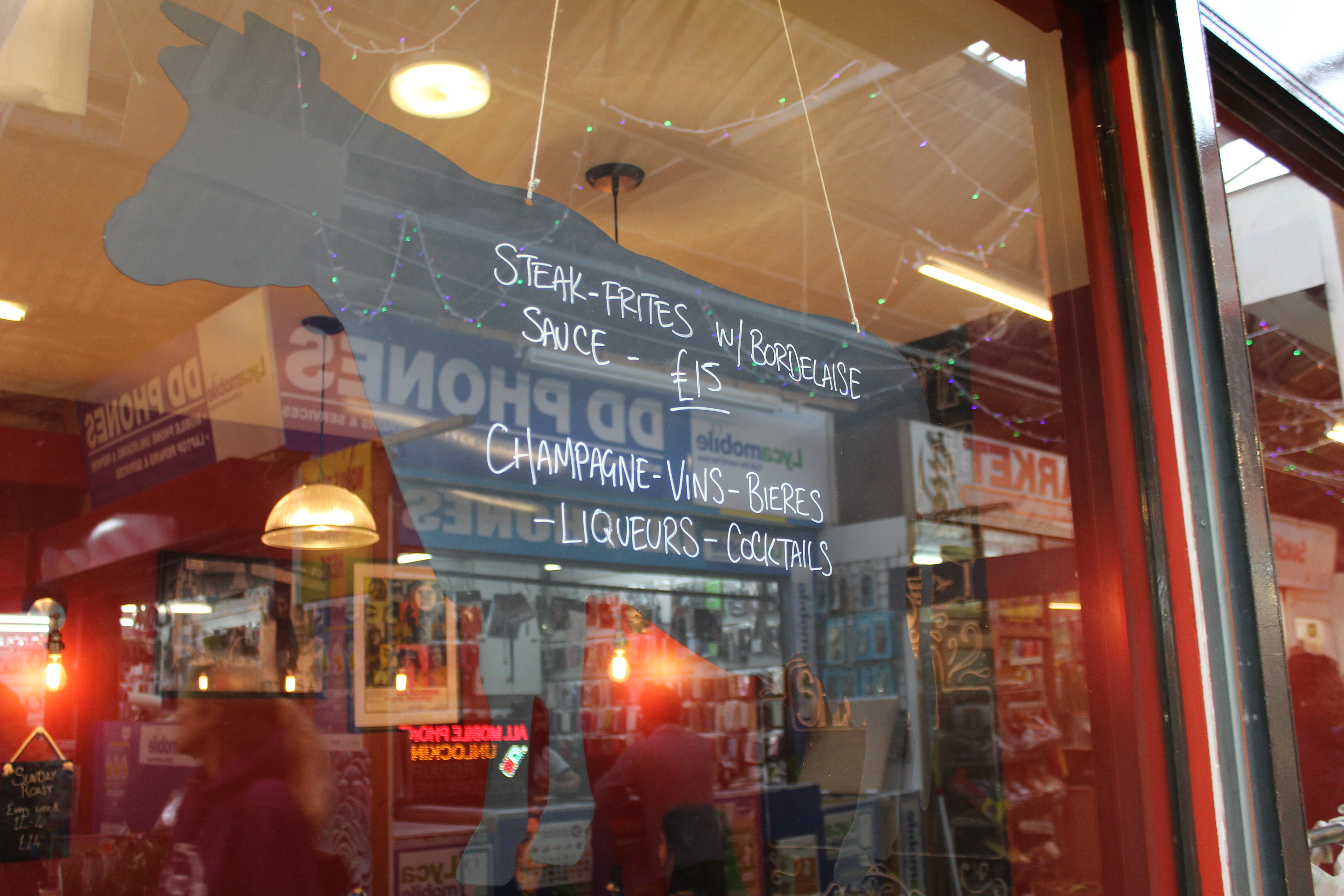 END_OF_DOCUMENT_TOKEN_TO_BE_REPLACED

Dining in the most romantic restaurant in London

For my birthday in October, my husband and I went to Clos Maggiore, just off Covent Garden – supposedly the most romantic restaurant in London, and also a place that the Duchess of Cambridge was spotted having a meal with her family. Because I’m nosy, and a foodie, I had to try the place out to find out what all the fuss was about!

END_OF_DOCUMENT_TOKEN_TO_BE_REPLACED

In a brand new, cavernous space a short walk from Bank station in the heart of the City lies the latest branch of Jackson + Rye, a restaurant chain dedicated to bringing an authentic slice of classic East Coast Americana to London. You wouldn’t know it was brand new except for the slightly lingering smell of paint – the dim lighting, dark leather banquettes, distressed wood and cages of whisky make it look like it’s been here forever. I was invited along to the press night to sample the menu, and never one to turn down an offer of some good grub, I duly arrived on a gloomy rain drizzled night, stepping from the cold air into the dark, cosy warmth of the restaurant. 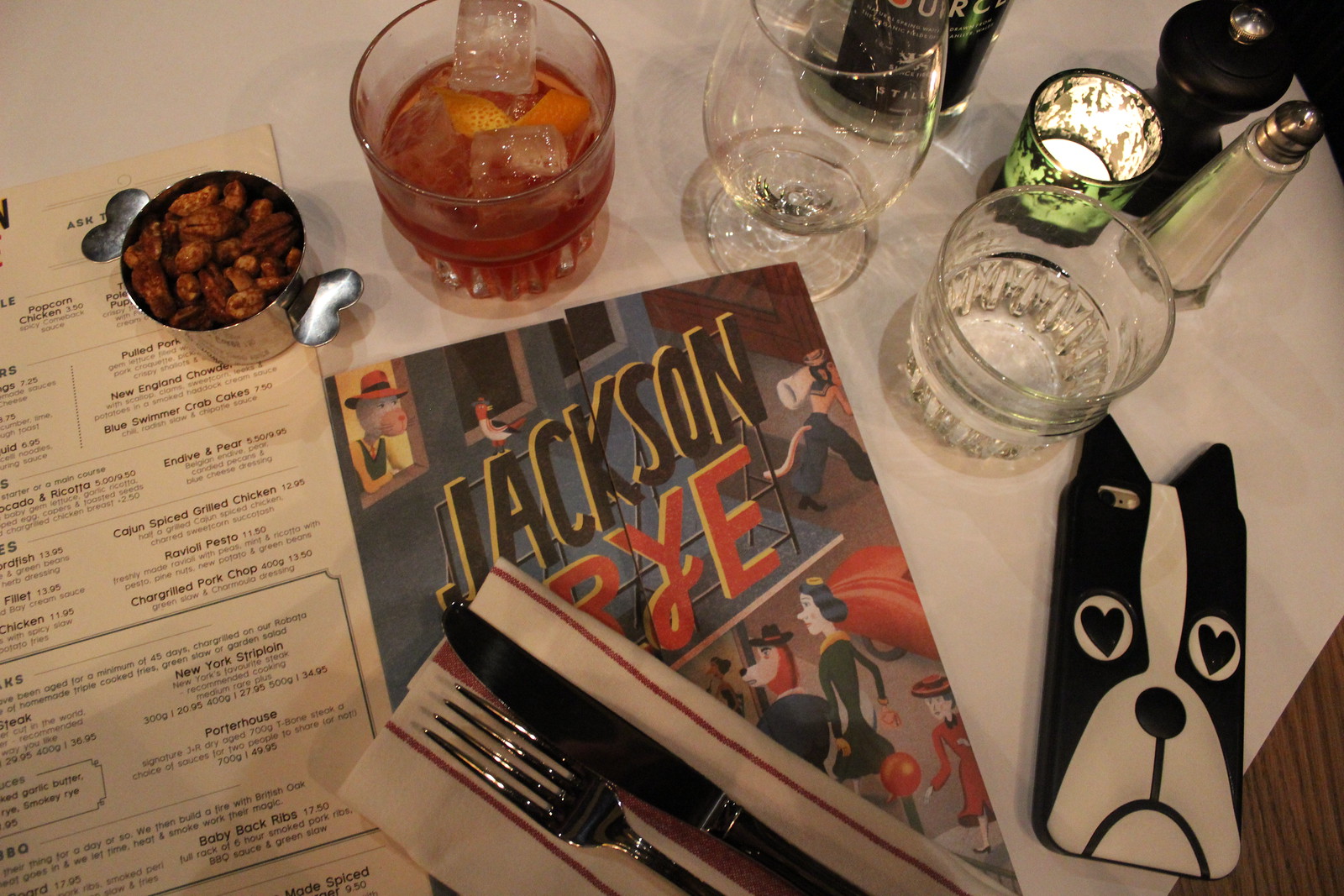 General manager Harry and his staff were helpful and extremely proud of their new space – hardly surprising when it’s so striking! The menu is a mix of classic all-American fare – some introduced to the UK long ago by chains such as TGI Fridays (hello buffalo wings), but there were a good number of recently trendy offerings like truffled mac and cheese, or more imaginative and original dishes like beetroot and curd, or crunchy Chorizo prawns. 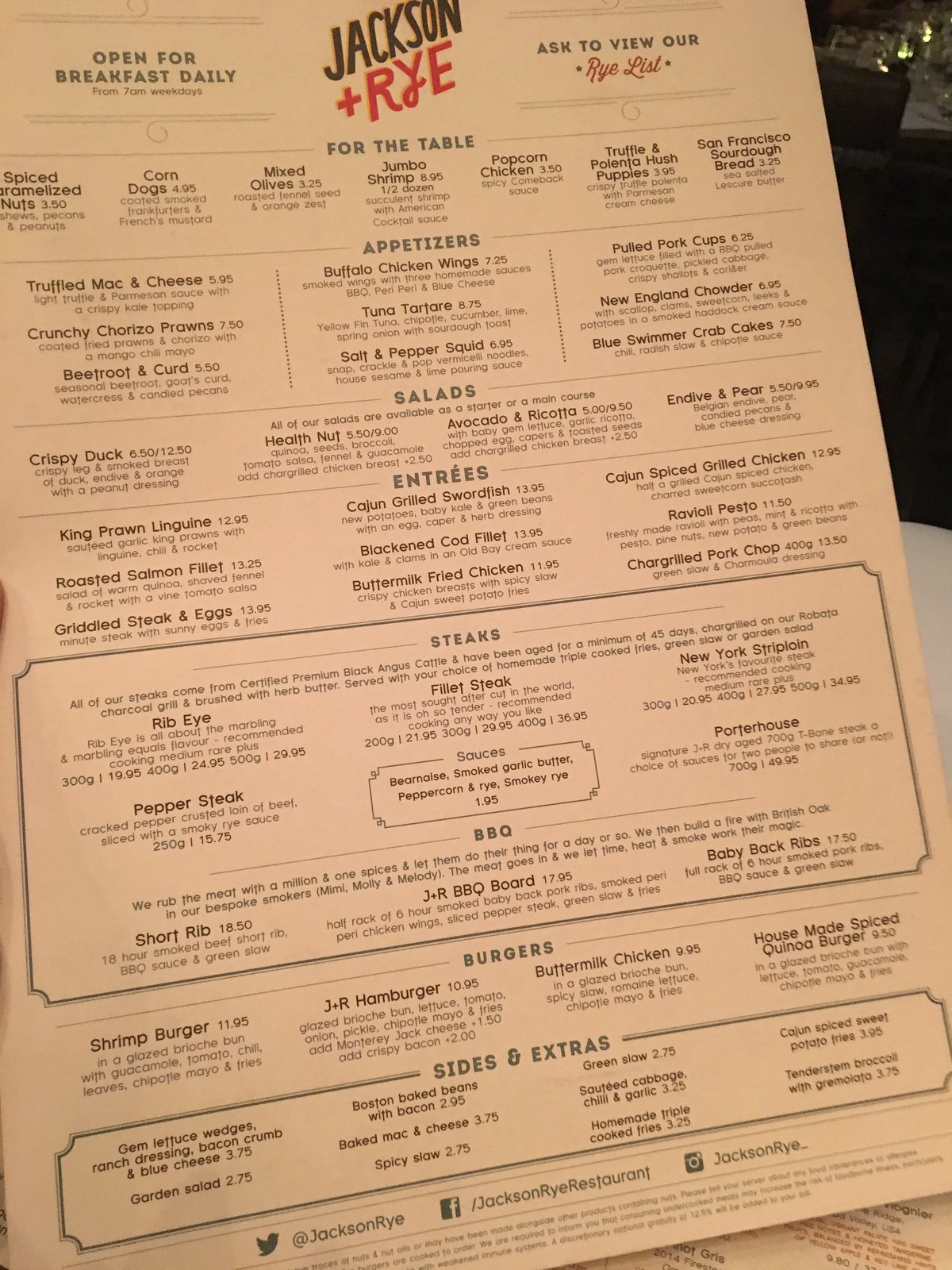 It was tough to decide between the Blue swimmer crab cakes, the endive and pear salad or the New England chowder, but I eventually plumped for the latter. Main courses were a mix of burgers, steaks and BBQ and traditional entrees like buttermilk fried chicken, griddled steaks and eggs, some fish dishes and a couple of pasta choices – again, a difficult decision. I decided to give the Short Rib a go – I’m a sucker for a well-cooked beef rib, and always curious to see how well the BBQ sauce goes down. 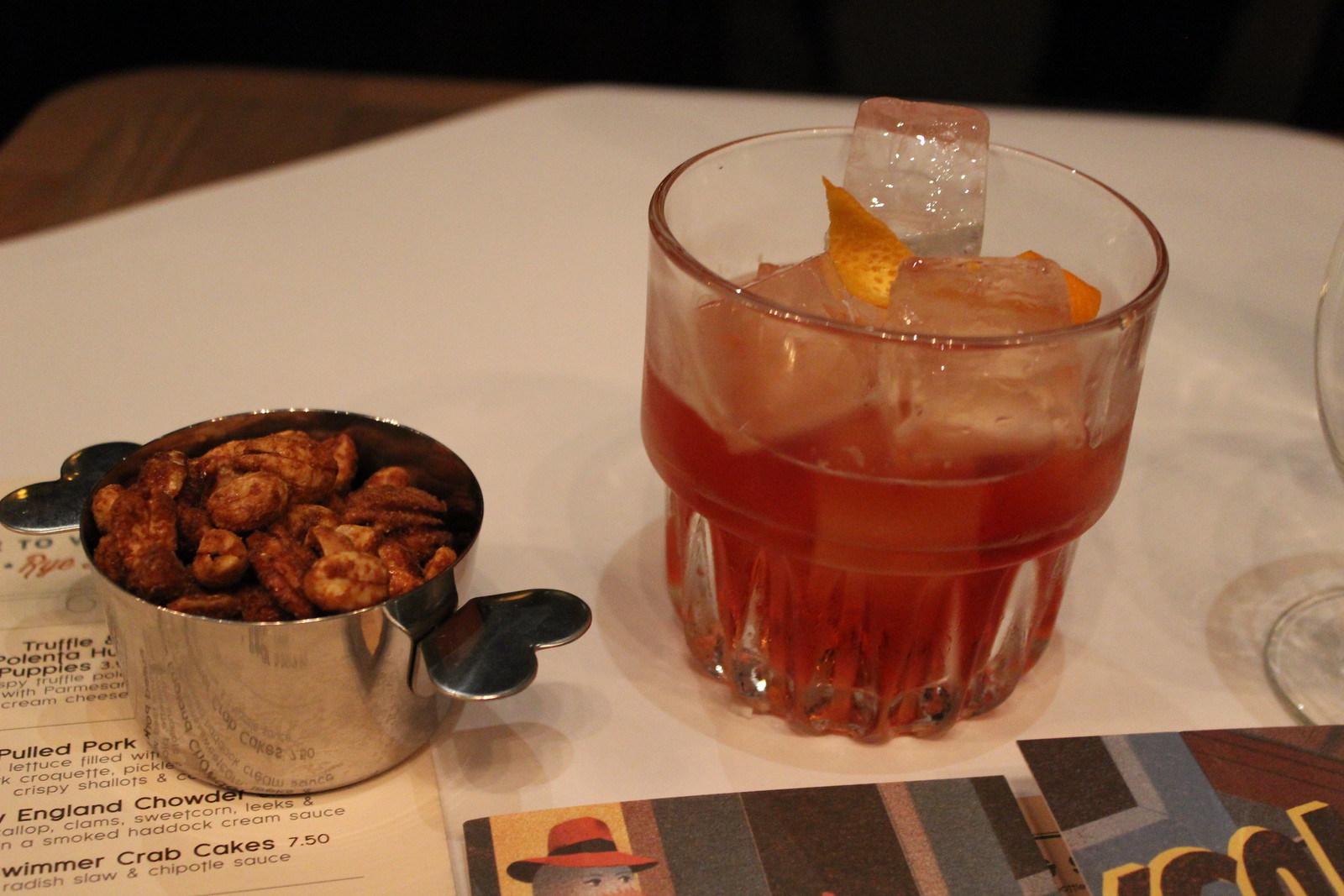 Before all that, though, was a dish of spiced caramelised nuts – a mix of cashews, pecans and peanuts – and an Illegal Negroni (Mezcal, Antica Formula and Campari). The drinks here are strong and pack a punch – and the nuts were a perfect complement, although I always hanker after a blend of sweet and salty… these were very slightly spicy but definitely not savoury. 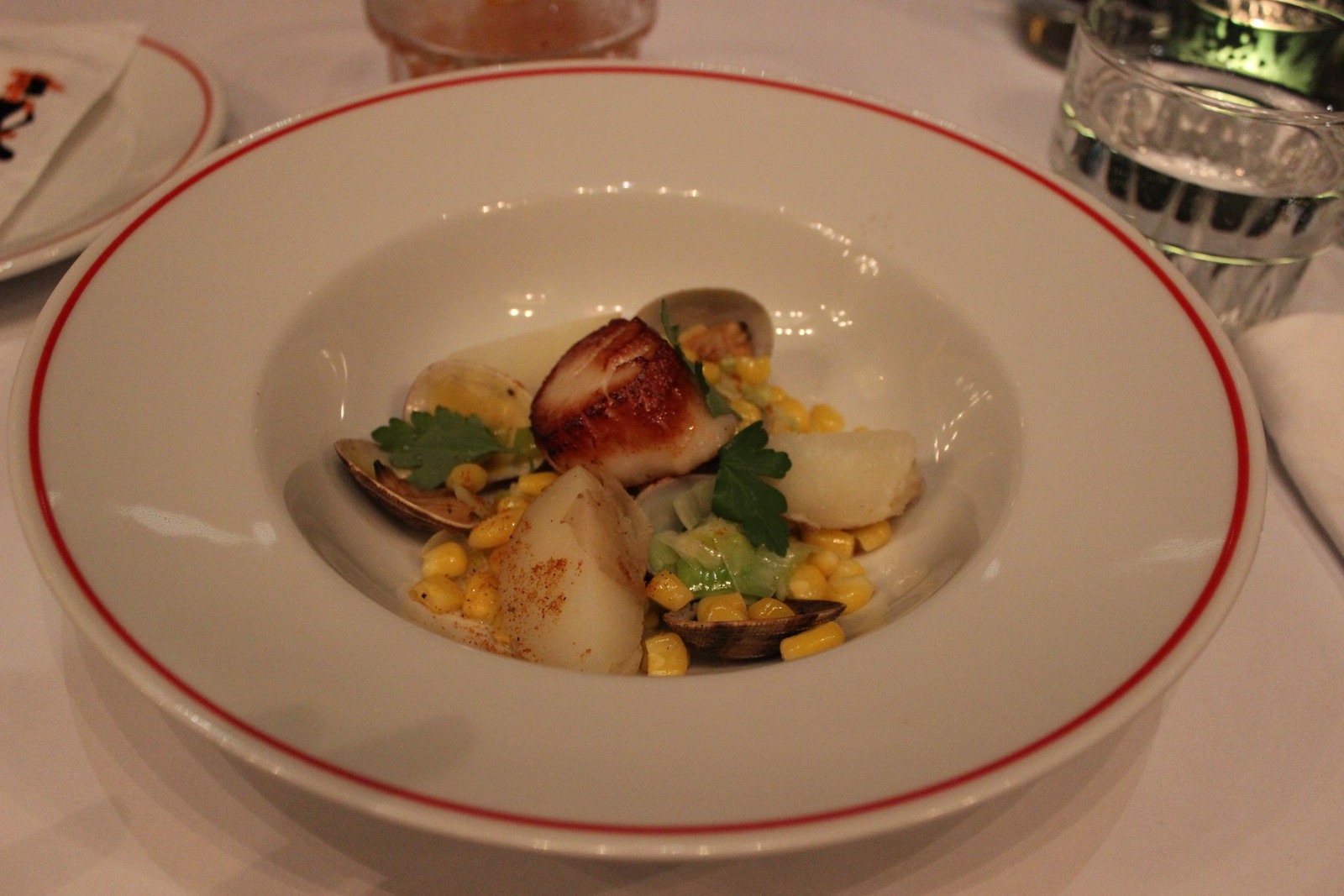 The starter of New England Chowder is served with scallop, clams, sweetcorn, leeks and potatoes in a smoked haddock cream sauce – a real rib-sticking winter dish. It’s served with a flourish as the rich stock is poured over the potatoes and seafood at the table. There’s the perfect amount of chowder for a starter – the salty rich soup balanced perfectly with the waxy potato and fresh clams – and it’s all topped with a plump, butter seared scallop, and studded with juicy, fresh pieces of corn. 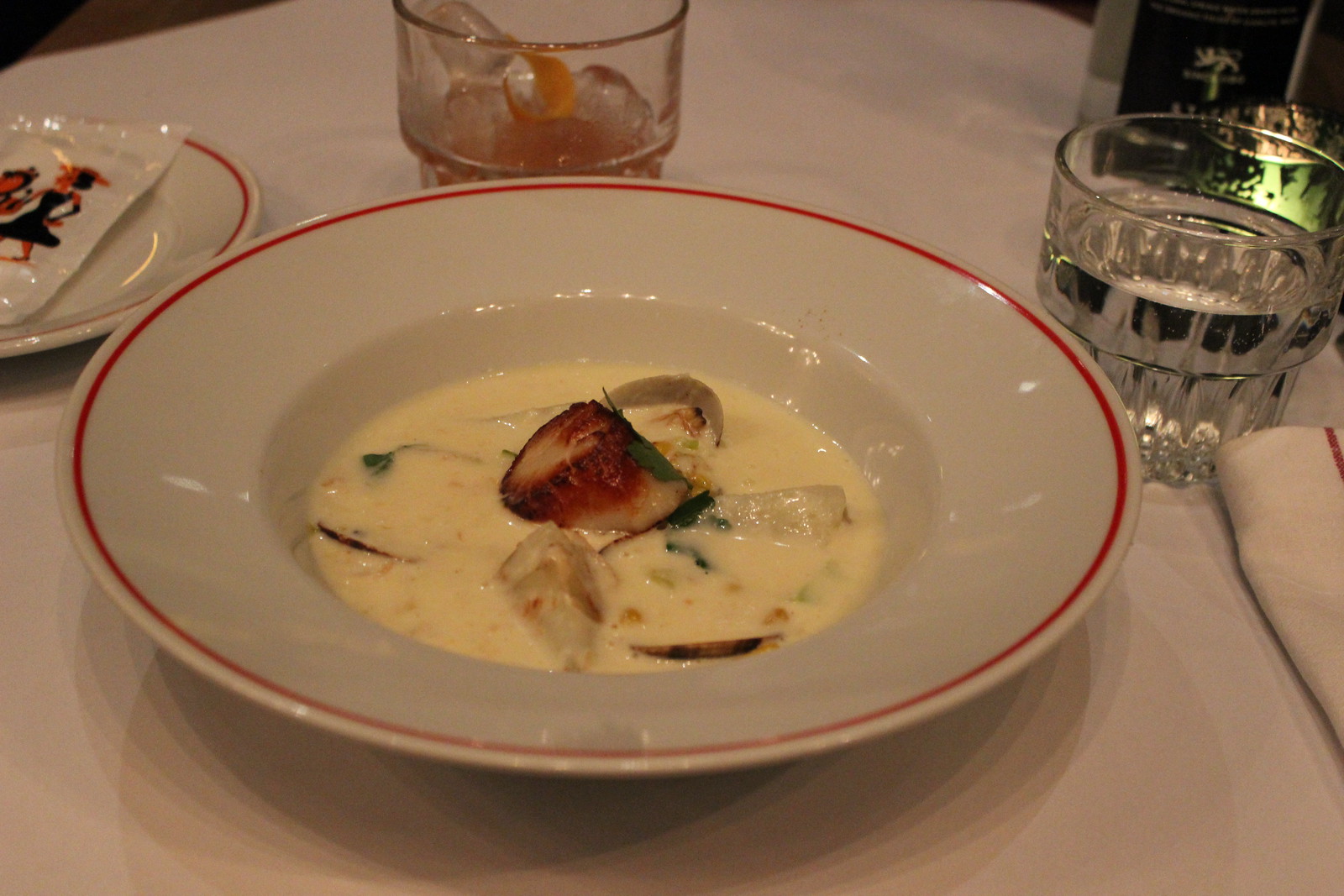 The short rib is an 18-hour smoked beef short ribs with BBQ sauce and green slaw. The BBQ meats are prepared with spices and left to marinate before being smoked with British oak chips. Neither rib dish comes with fries (you can order them from the extras menu), instead being served with a fresh green slaw. The short rib is a thick, meaty slab with a fantastic aroma of smoke that’s apparent even before you dig in. 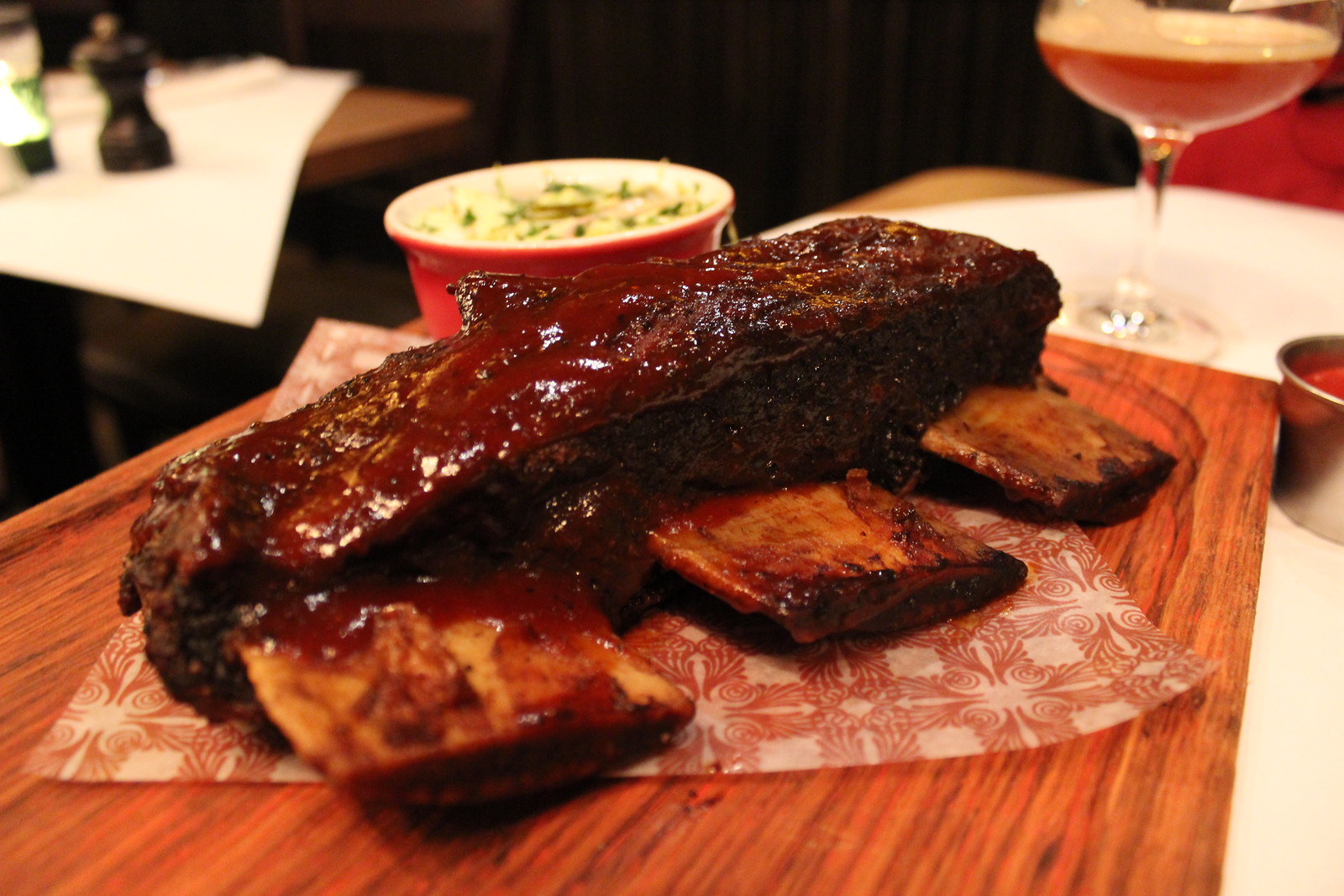 The meat has a beautiful, rich and smooth texture and is easily pulled from the bone. The result of the smoking is a springy, almost teeth squeaking texture and a bold and distinctive flavour. The green slaw is a genius addition and nothing like the herby coleslaw you might be imagining – instead it’s a crisp mix of hearty greens and cabbage and red onions and sliced gherkins in a sauce of yogurt and mayonnaise; a perfect foil for the rich umami ribs. 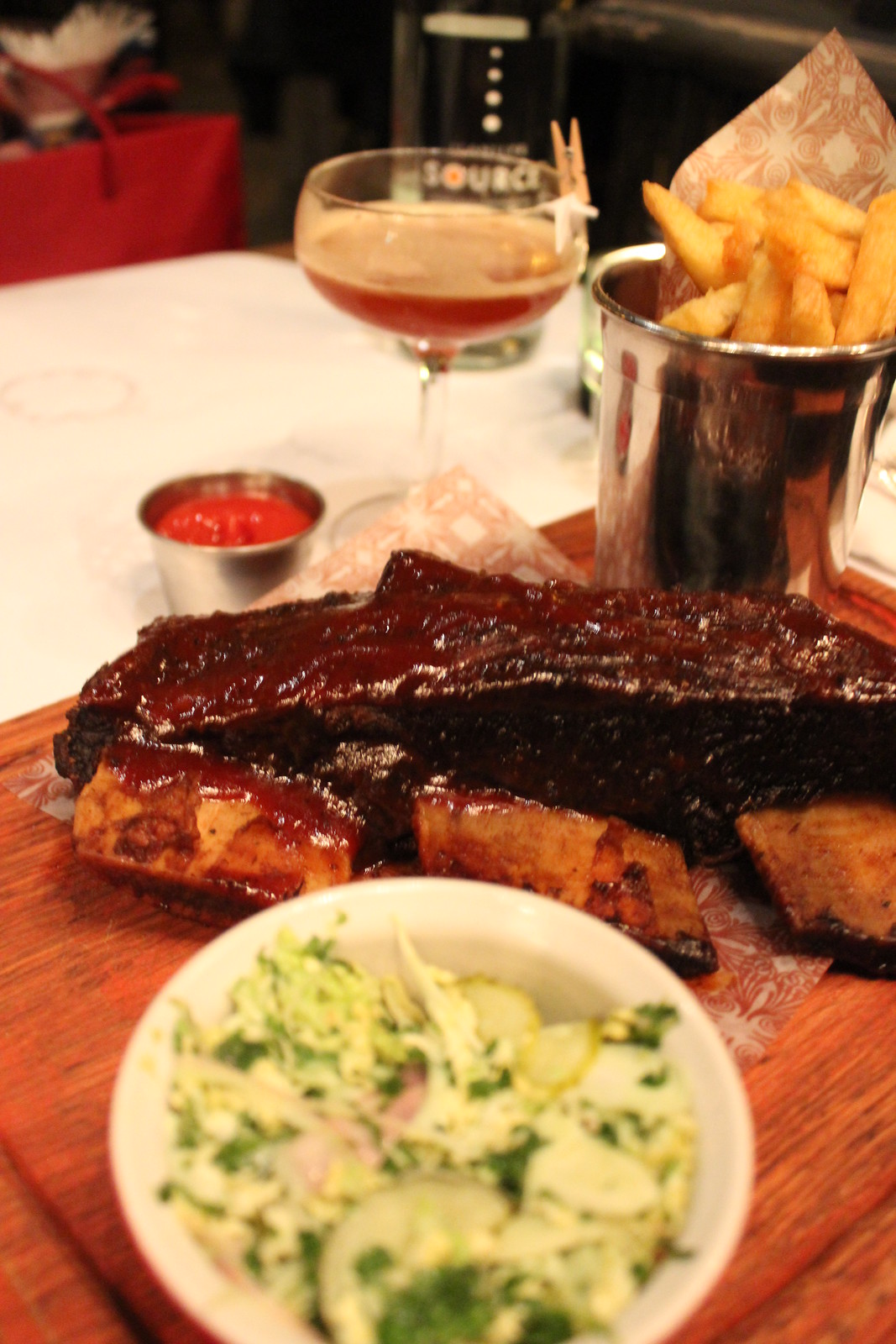 I also had to try the triple cooked fries – to be honest, these were overkill (and if you want to ditch the slaw and replace it with the fries you can), but I never like to pass up a triple cooked potato! These did not disappoint – well seasoned throughout with a crispy Shell and fluffy middle. Both my starter and my main course were so delicious I’m still thinking about them both days afterwards! 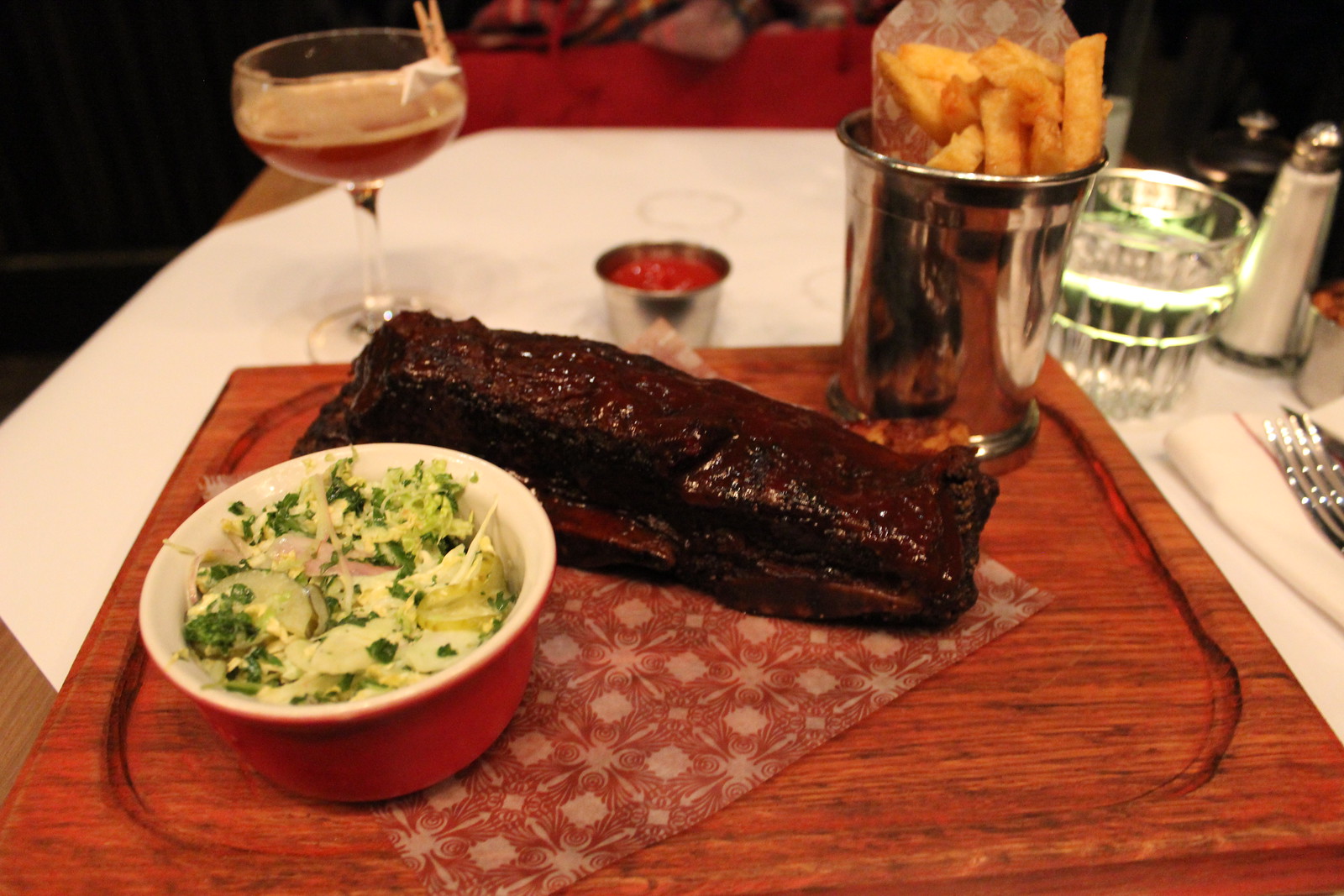 For pudding I went with my waitresses’ recommendation of pecan pie with the Ritterhouse Bottled in Bond 100 Rye. Jackson + Rye’s list of whiskies, bourbons and ryes is a sight to behold, intelligently constructed and a great read to boot. The liqueurs are ordered according to flavour profile and the Ritterhouse I had was from the section called Pancake Parlour – promising a rich, viscous drink with notes of maple and banana, a great pairing with the pecan pie. 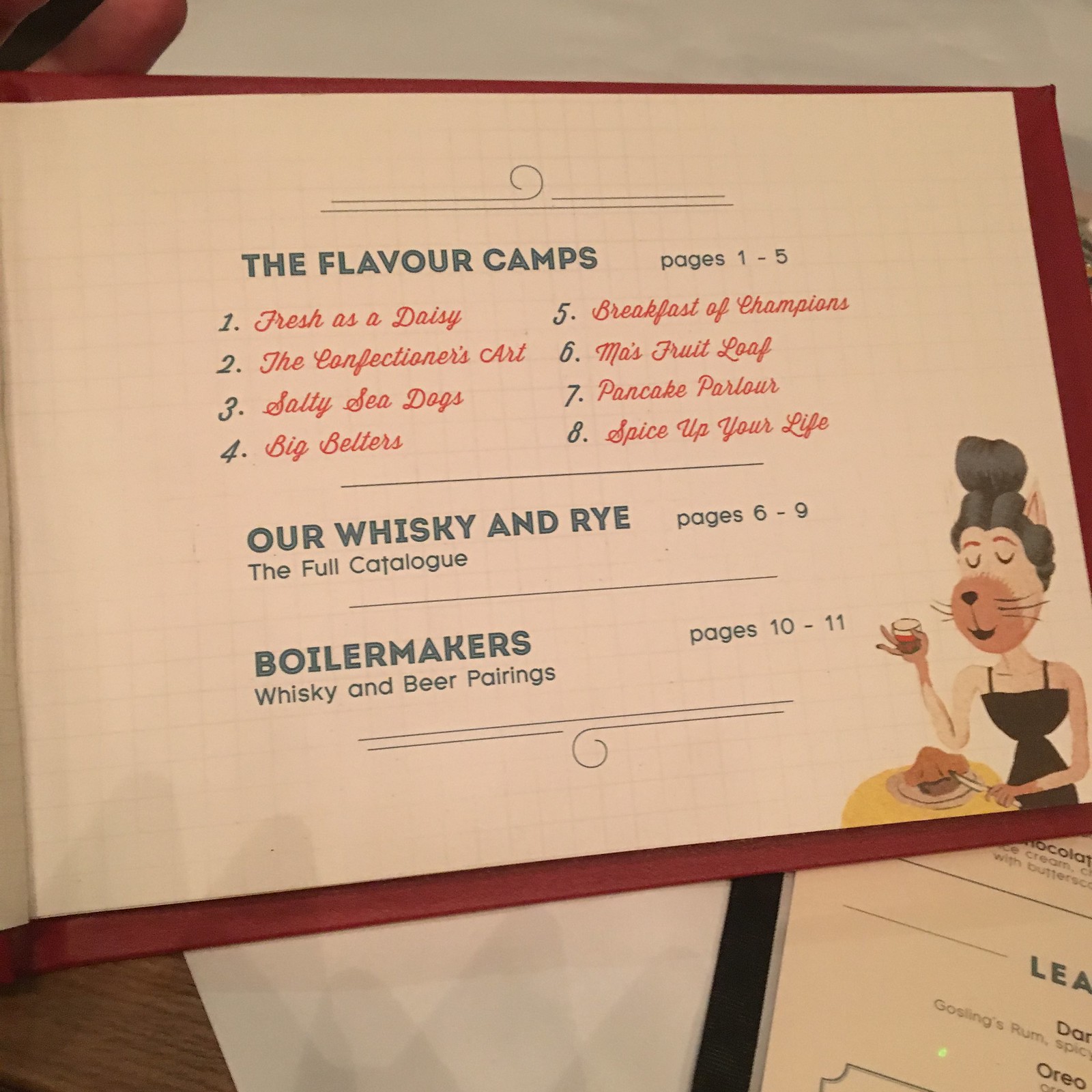 The dessert was homemade – a reassuringly familiar jellied like textured base topped with crunchy, caramelised pecans on a crispy pastry base. It came with a rich caramel ice cream and a bourbon and maple syrup sauce. Divine! I have to say, it tasted exactly like it does when I make it at home, which makes me wonder if my love of it is just a massive humblebrag… 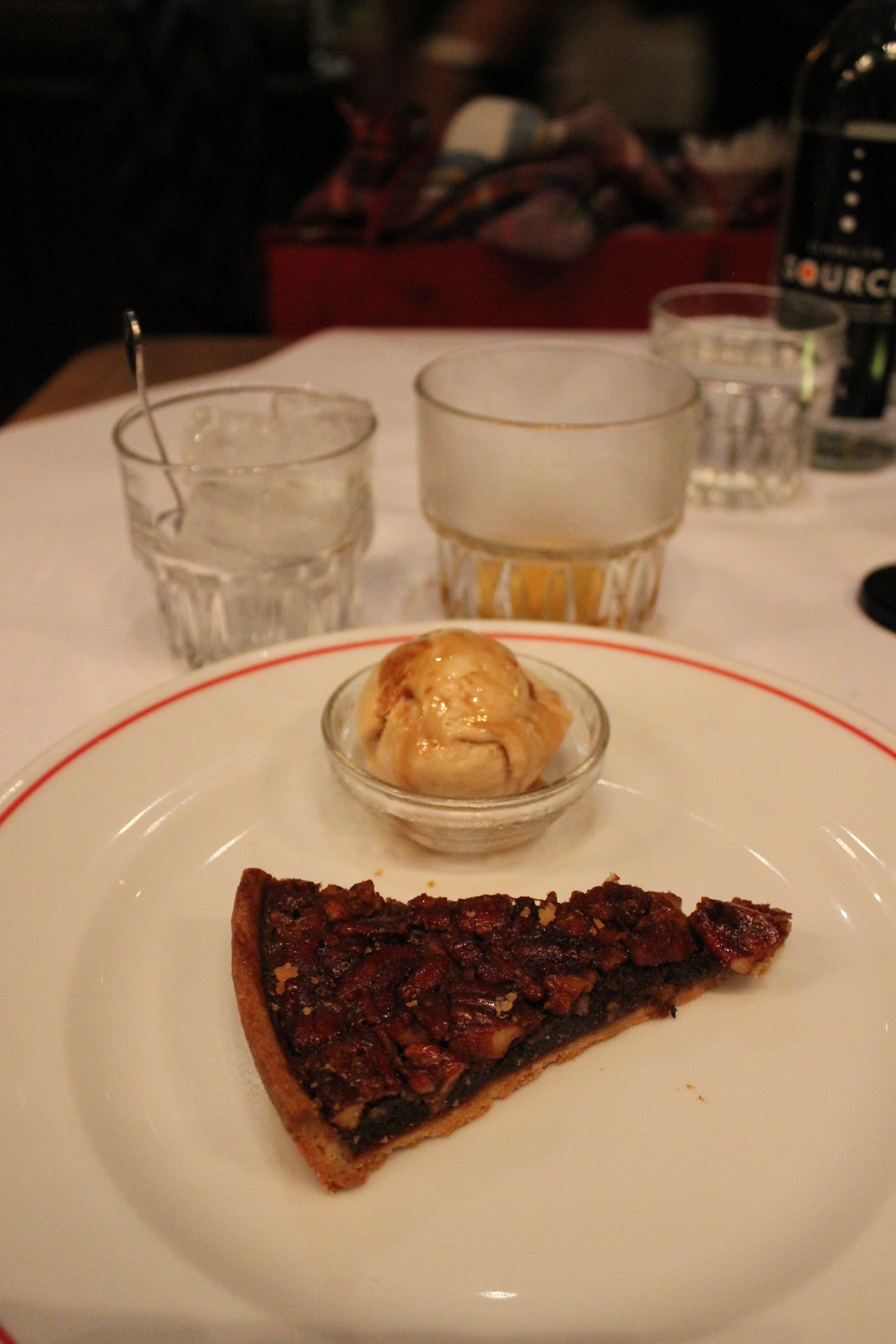 If you fancy a decent helping of Americana, served with sophistication rather than a hefty squirt of cheese from a can, I heartily recommend Jackson + Rye. The broad yet classic menu is full of modern twists, the cocktail list is fantastic, and their liquor can’t be beaten. Every course I had met my expectations, and I don’t think you can beat their chowder or their short ribs! There are multiple locations across London, and you can find them and view the menu here: www.jacksonrye.com.

View images taken during my review by clicking below. My meal was complimentary but my photos, views and opinions are my own. 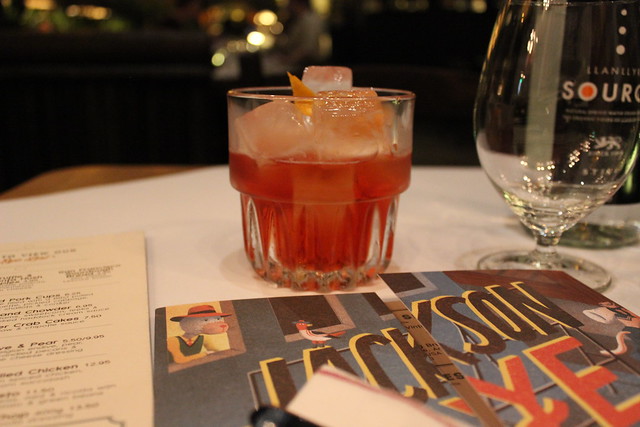 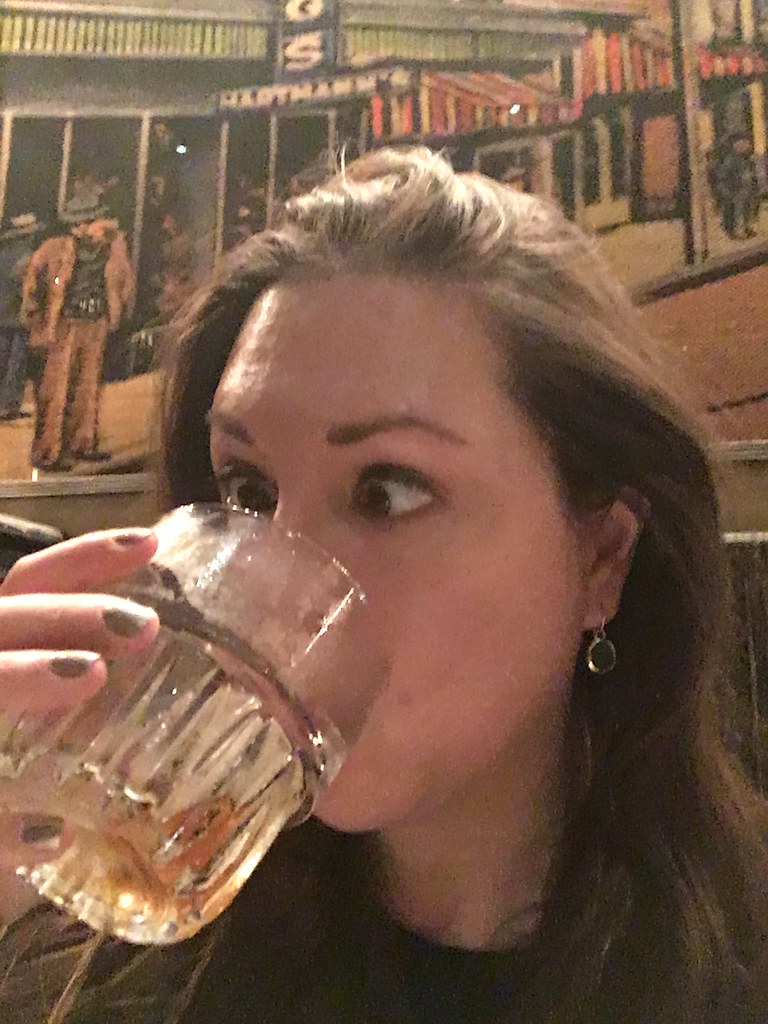