A while back, in my Economy Gastronomy post, I wrote that I had been living off about £15 a week for food for two people for a few months. Maybe some of you read that and went, “woah, what a liar”, or possibly, “why?”, or maybe even “£15? She’s the lucky one, I have to walk ten miles every day to eat food from a rubbish dump”. No matter what your reaction, I feel like I must explain myself.

I decided to go on holiday with my dear beloved to Franchland, so we could visit a few of the places that we used to when he lived there. We stayed in Granville and drove up from St Malo, and had a blast visiting Cherbourg and Mont-St-Michel. But, in order to fund this jolly, we had to seriously scrimp on the shopping, fasting in order that we may feast our little hearts out eating chips and steak twice a day the whole time we were there. 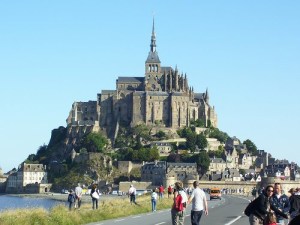 (Mont-St-Michel – like Lord of the Rings meets Harry Potter. Totally fricking awesome, didn’t think I’d like it half as much as I did, but it rocked.)

We worked out a budget of £60 per week for food, and then, whatever was left at the end of the week, we put into a pot to save for France. We ended up taking over £700, which should indicate how much we’ve been scrimping. But, it was worth every single last can of Tescos Value Beans, because I bought everything that wasn’t nailed down, including copious amounts of fleur de sel de Guerande and salted caramel everything. My cupboards are now full of delicious French foods from the supermarche, and I am content. AND I’m back up to £60 a week for food, and I feel absolutely rich beyond my wildest dreams. I even bought a sliced white loaf of bread from Sainsbury’s the other day, which is the first time in ages I’ve not baked my own. Yes, baking your own bread is fun to begin with, but when you have to do it three times a week to save money, the novelty soon wears off, even with a breadmaker.

(Picnic on the beach at Granville – worth every scrimping minute)

As far as how you live on £15 a week, it’s pretty easy. Bake your own bread, like I said, that saves money. Having a well stocked larder and freezer is obviously a cheat, but also pretty damn essential. I buy huge packets of chicken thighs and drumsticks and freeze them in pairs, which is very thifty. Mince is a massive essential around here, as well. Eating very little meat makes things easy. I make massive batches of chilli and bolognaise when I can. Eggs are great value and Sainsbury’s do these great family packs of free range ones which are really cheap.

I reckon it generally just helps if you’re really stingy, and your OH doesn’t mind eating wheat biscuits and marmite sandwiches every single day of his life (he actually insists on it). Even so often, I’d cave and buy something with my own money, rather than our joint account, so I can’t claim to be totally angellic about this, but I’m sure you can see why I feel totally vindicated in laughing my ass off at the fantastic savings to be made from following Economy Gastronomy.