Following on from my first budget week post, where I’m aiming to cook a week of dinners for two adults from £20 spent at Aldi, I’ve already posted a recipe for spinach, bacon and onion pizza here, and now I’m onto my second dish – a spatchcocked chicken with wedges and sweetcorn!

I have to pause here and point out the obvious – this is not fancy cooking, it’s not original, and I’m not saying these recipes are going to change your life. In fact, I’d go so far as to say that these are super basic ideas most people already know how to cook. The point of the exercise is to see what I can make for two people with £20 for a  week, supplemented by my admittedly healthy pantry!

So, now that the disclaimer is over – onto the recipe. This chicken was purchased for £2.25, and the weight was 1.25kg. With the meat from the chicken I’m making two recipes – the first is this simple dish, and the second is a chicken pie. Because I’m using the meat in a second recipe, I decided to keep the seasoning classic, but if you wanted to there are obviously no end to the spice rubs you can add to your chicken. Instead of doing that, I decided to put most of the interesting flavour onto the wedges instead. 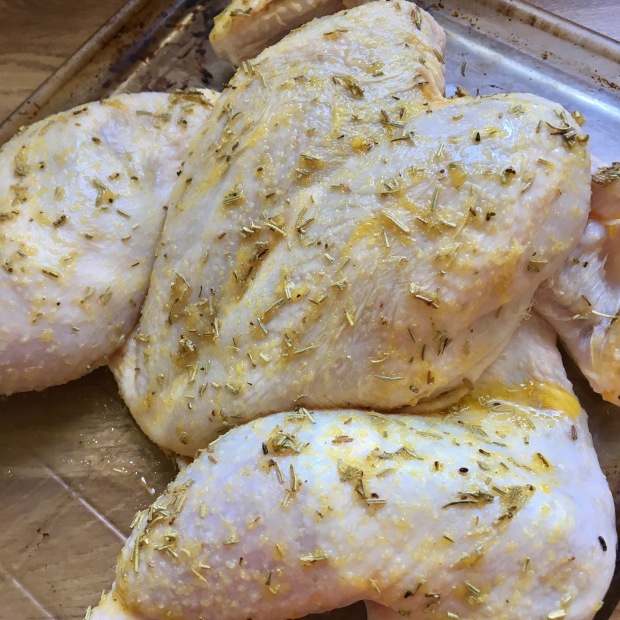 Oh, and you might be wondering why I spatchcocked the chicken instead of roasting it normally! First of all, it’s one of my favourite ways to prepare a whole chicken for a BBQ (yes, you can cook a whole chicken on a barbie, and it comes out REALLY well!) so I wanted to introduce you to this method if you didn’t already know about it or were too scared to try (DO IT!), and secondly, it’s a great way to cook a chicken evenly so the chicken breast doesn’t dry out before the legs cook. It’s really simple to do – just use chicken shears or a sharp knife to cut out the backbone of the chicken, then turn the whole thing over and flatten with your hand.  (Here’s a great guide.) Also, because we’re going to use the meat and bones for another recipe, make sure you save the backbone (I roasted mine with the chicken) and the carcass and leftover meat when you’re done.

Mix the seasoning with the oil and spread onto the chicken. Roast in an oven for around 40-50 minutes on 180c (for a fan oven), or until the juices run clear on the thigh.

Meanwhile, cut the potatoes into wedges, and mix your seasoning with the oil. Spread onto a baking tray and bake in the oven with the chicken, turning as needed to brown evenly.

When the chicken is done, allow it to sit while you cook the sweetcorn. Bring a pot of water to boil and pop the corn in for five minutes.

Pour the juice from the cooked chicken into a jug. You can use some of this to pour over your chicken when you serve it (I LOVE it mixed with mustard), but save the rest for your pie.

Cut the chicken breasts from the cooked chicken, slice, and serve on a bed of spinach on your plate.

Reserve the rest of the meat (I took an extra 200g from the chicken legs, thighs and rest of the carcass), and the bones for stock.

Got myself a climbing courgette plant… I didn’t know there were any like this, but I love it! Very interesting 😳