This weekend, I spent my time cooking 10 recipes from Together: Our Community Cookbook, so I could let you know my thoughts on the content of the book!

For context and a wider view of the project, make sure you read the first part of my review here.

One of the parts I was really looking forward to trying were the dips. Munira Mahmud created two unique dips of her own invention (and I hope you get a food van one day, Munira!) so I had to try them – green chilli & avocado dip and green chilli & tomato dip. I also made Leila Hedjem’s hummus and Claren Bilal’s spicy peanut dip. 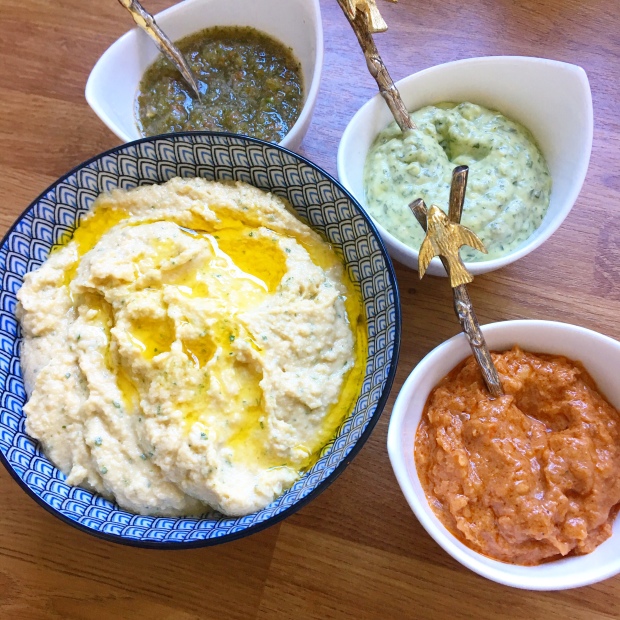 All of the recipes make plenty – depending on what else you’re serving. Both of Munira’s dips were piquant and luxurious – her avocado dip in particular was smooth and creamy, like a guacamole, but more versatile. Leila’s tip for adding coriander to the hummus was great (advice from a Turkish friend apparently!), and the spicy peanut dip was really good – with everything, just as Claren promised. It wasn’t too overwhelming, and if you want it really spicy I would suggest adding more chilli.

I served these dips with the kofta kebabs and onion and sumac pickle, which was a recipe by Halima Al-Hudafi. I ended up making a double portion and have frozen the mix in 500g bags for future events – these are gorgeous and toothsome little treats and the onion pickle is great to keep in the fridge as a side dish with some pitta bread too!

I love the way the spiced potato kibbeh looked – with that spiderweb pattern you could almost say it was Halloween-themed! I don’t think I made mine correctly, as I only had regular grain bulgur-wheat, not the fine type that Intlak Alsaiegh suggested. As it was larger I precooked it, but although I thought the recipe was delicious, it ddn’t have the crisp outside it was supposed to have, although it was tasty and moist inside! 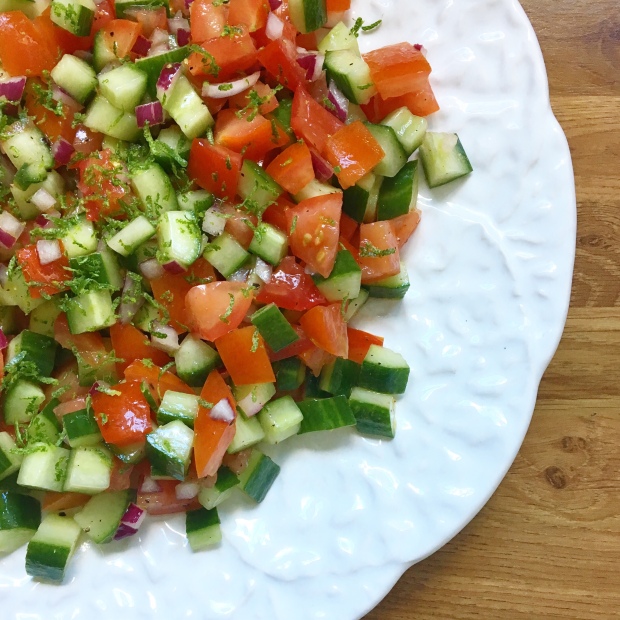 Sanna Mirza’s salad Shirazi was fresh and crisp and simple – and a familiar side dish for curries for me! The addition of lime zest makes it look even more elegant and special for a spread.

Now to the main event: the curries! I cooked three curries – two chicken, and one vegetable. This is Mama Jay and Jay Jay’s jeera chicken (jeera means cumin). This is a moreish yet simple yogurt based curry that uses chicken thighs on the bone for flavour. I cooked mine for so long the meat fell right off the bone, but you can have this ready after simmering it for about 30-35 minutes, depending on how thick you’d like the sauce. You can also freeze this when you’re done, before you add the coriander! 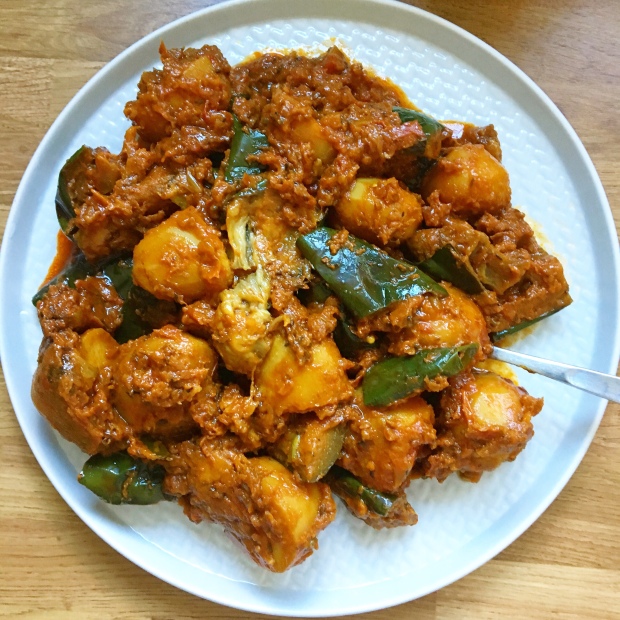 The aubergine masala by Gurmit Kaur is a thick tomato stew with chunks of new potato and aubergine in it – a great main course for vegans (more on that later) and a nice alternative potato curry to the usual Bombay potato side dish.

My favourite curry, Aysha Bora’s coconut chicken curry, was probably the fiddliest to cook but gave the tastiest flavour. You marinate a whole chicken you’ve jointed in a curry paste, then grill the pieces tandoori style before adding them to your coconut curry sauce and topping with hard boiled eggs. My tip is to use ready-jointed chicken portions like wings, legs and thighs (but the skin must be on!) and to prepare well in advance for a deep flavour. My other tip is for the eggs! Select golden-yolked varieties for maximum visual impact, and for a fluffy yolk and silky white, follow these steps: place room temperature eggs in a pan, cover with cold water, bring to the boil, remove from the heat and cover, and let sit for ten minutes. Then immediately rinse and cool. This is a foolproof method I’ve been using for years! As with the jeera chicken, you can freeze this, but you have to do so without the eggs. Add those once the curry has been defrosted.

For vegans and vegetarians, the good news is that a lot of these recipes are either already veggie, or can be adapted to be. The book is divided into sections, so I went through each one to work out the count. There are five breakfast recipes, all vegetarian and three vegan. There are fourteen snacks and dips, and ten are veggie and seven are vegan. The lunches and dinners are mostly meat-based: of sixteen, four are veggie and two are vegan, but it may be possible to cook some of them with alternate proteins. Of the eight salads and sides, all of them are vegetarian and seven are vegan. Finally, none of the eight puddings are vegan but all are vegetarian, and there are three drinks recipes, all veggie and two vegan. Of the total 54 recipes in the book, 38 are vegetarian and 21 are vegan.

Before I leave this review, I’ve seen a few ‘critiques’ of this book online claiming there’s a lack of diversity in the recipes. I presume that these people haven’t read the book, as there recipes in here from Morocco, Yemen, Algeria, Sicily, Russia, France, India, Ethopia, Uganda and beyond. I suspect these people are trying to make a political point, but thankfully their views seem to be in the minority!

Finally, I would like to extend my huge thanks again to the ladies of Together and the Hubb Community Kitchen for sharing their recipes so we can all cook them at home. I wish you all great success with the project and I am certain that you’ll get the funding to keep the kitchen running all week in no time. And, can we have a volume two, please?

If you’d like to purchase the book, you can find a link here. I think I’ll need a new one soon because this one is covered in splatters – a sign of a well-used recipe book!