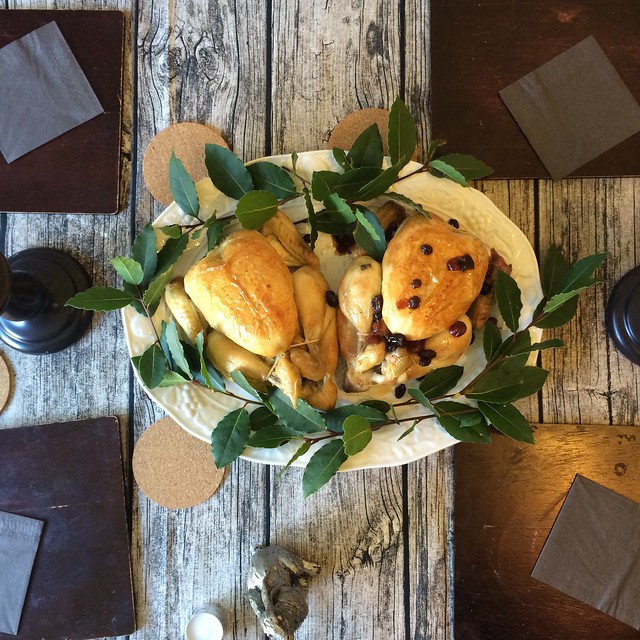 Like everyone else, I’m a huge Game of Thrones fan – who doesn’t love dragons, dinner and debauchery? Just like with The Hunger Games, it was partially the description of all that delicious food that hooked me in, and I’m obviously not the only one. If you have a passing interest in the food of GoT, you’ll probably have heard of the amazing recipe book A Feast of Ice & Fire, by Chelsea Monroe-Cassel and Sariann Lehrer. They started out with the blog Inn at the Crossroads, which is an equally amazing journey through some of the most intriguing recipes from Westeros and beyond. Many of the recipes are based on originals from Medieval cookery, which weirdly enough I also have an interest in, so this recipe book was a massive must-buy for me! 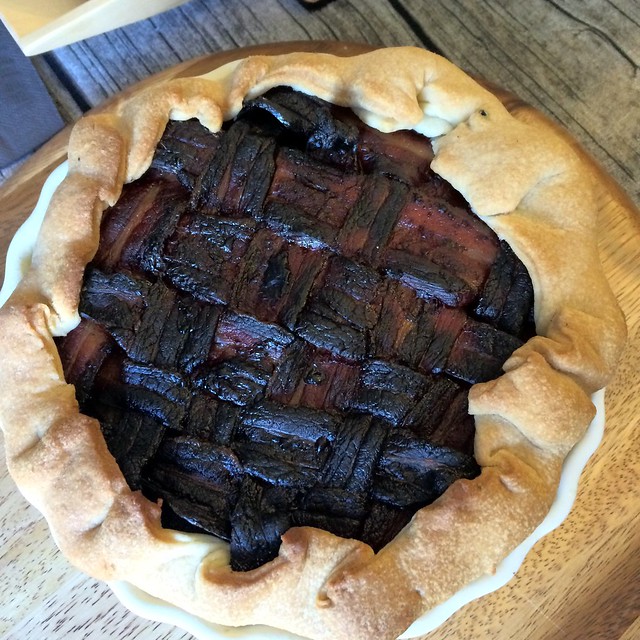 Anyway, this post is a combo of two events – a GoT party with my friends a few weeks ago, and a Father’s Day dinner on the day of the US finale, so I thought this would be the perfect time to post about it! I don’t have any good photos of my outfit, but I dressed as Margaery Tyrell, wearing a pink maxi dress by Omar Mansoor (from Girl Meets Dress). 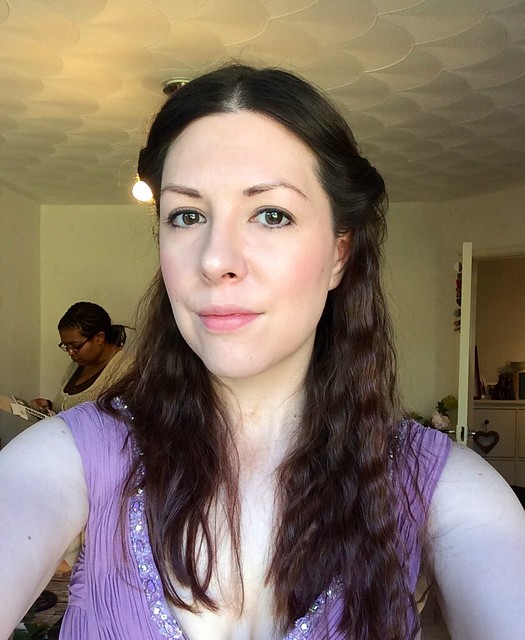 I paired it with an older pair of Louboutins I bought for my honeymoon back in 2010 – they rarely get any love so I was happy to drag them out of the closet, especially as I needed the height to get my dress off the ground! 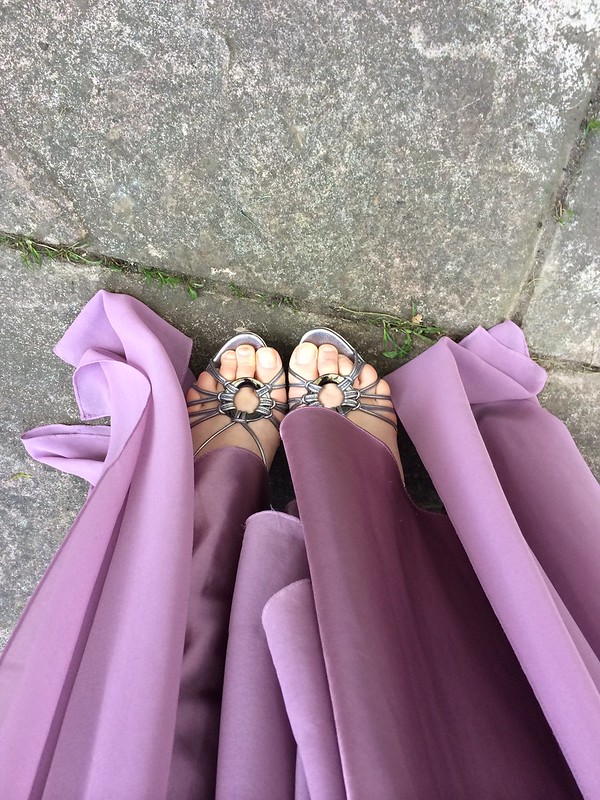 Anyway, this post is all about the party, the recipes and the food! I have to say, if you’re on the fence about buying A Feast of Ice & Fire, you should take the plunge – not only is it a great read, but it’s also full of recipes that are easy to make, and create amazing, unusual dishes that you’ll not find anywhere else. One of my favourites was the honeyed chicken recipe, which has a sauce made of dried berries and currants, butter, mint, apple cider vinegar and honey. 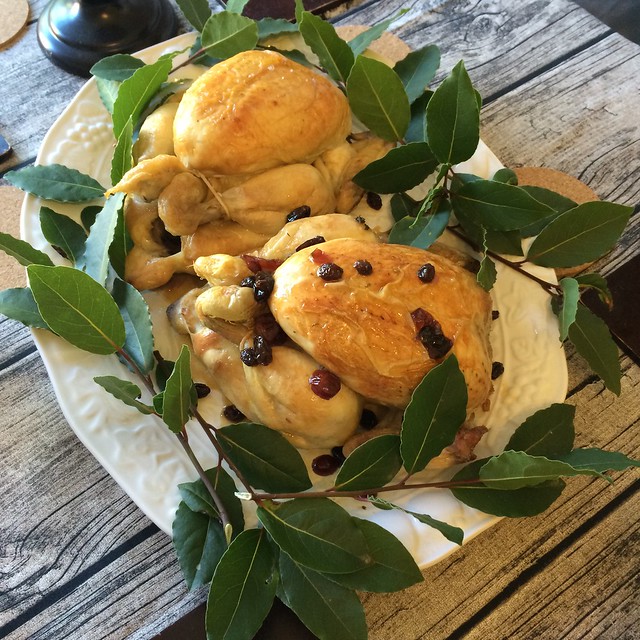 This was definitely one of the highlights for me – and the sauce was absolutely phenomenal. Especially with some crusty bread to mop up the juices! Of course, you don’t have to make everything yourself – a pork pie is a good idea to bulk up the buffet. In the background of the pic you can see some bottles of Lemonsweet – a delicious, sugary, zesty drink that none of us could get enough of, based on a 17th century recipe in the book. We seriously had to ration this out because it was so good (and it’s also amazing added into a glass of Pimm’s too… Just sayin’.) 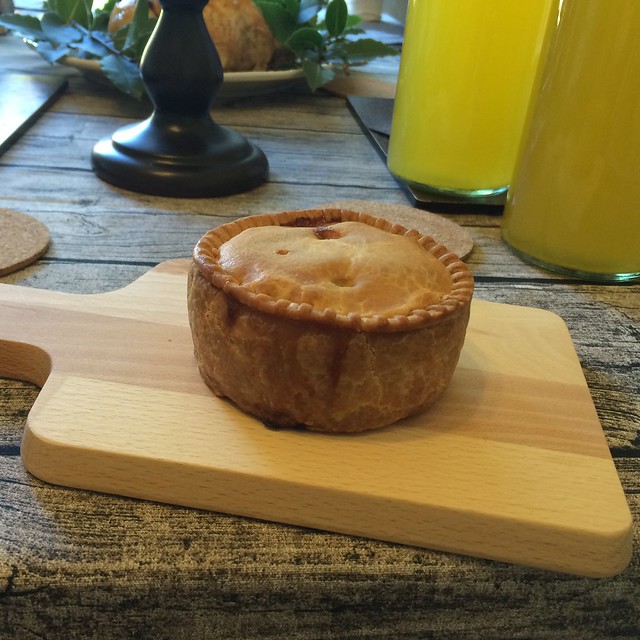 By the way, if you’re looking for an excellent place to get props, Ikea is a good bet. The Proppmatt cheese / chopping board, “wooden” Solfint tablecloth and brown Ersatta wooden candle holders were all from Ikea. Our Winterfell heart tree (without face…) was from Design Ideas, via John Lewis (called the Sherwood tree). 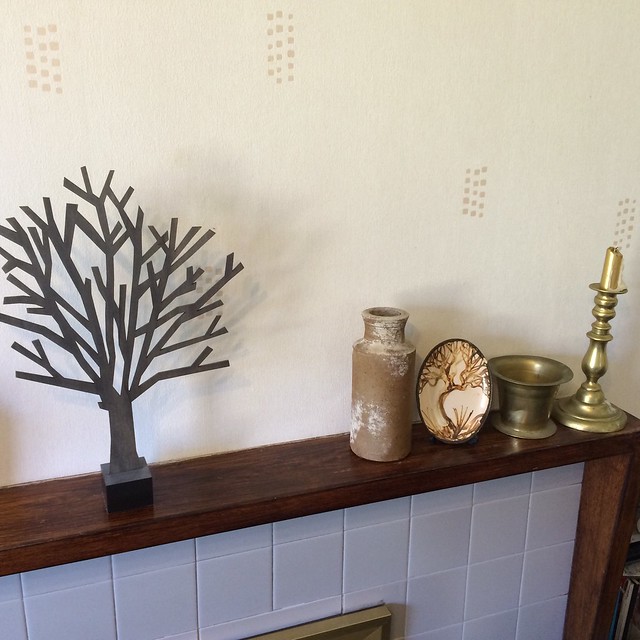 And, our cool Pokal goblets and birch bread roll dish were from Ikea as well. The other bits and bobs were lying around the house already, it’s surprising what you can rustle up when you need to! Think about digging out old lamps, tealights, and bunches of herbs and bay leaves. Save old bottles and check in charity shops for tableware. Spanish style tapas dishes are also really good for this too. We had a kind of King’s Landing/Winterfell vibe going on, but it’s better if you pick one location and stick to it. The book has some suggestions and ideas for the main locations from the series. 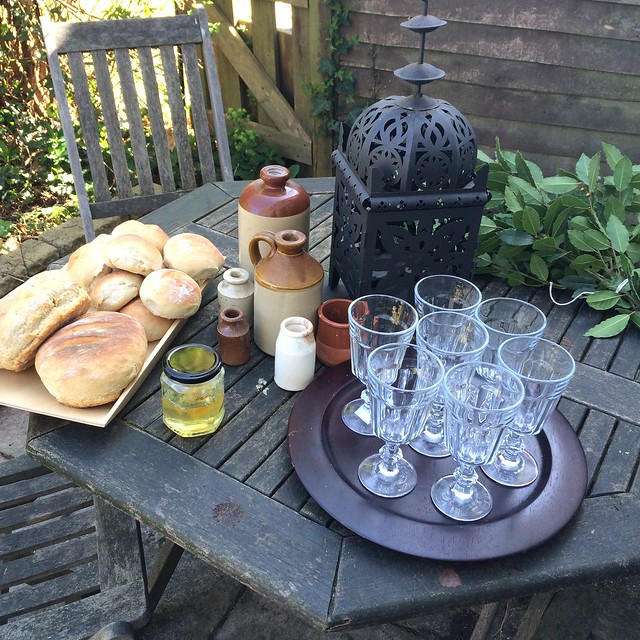 Anyway, back to the food… 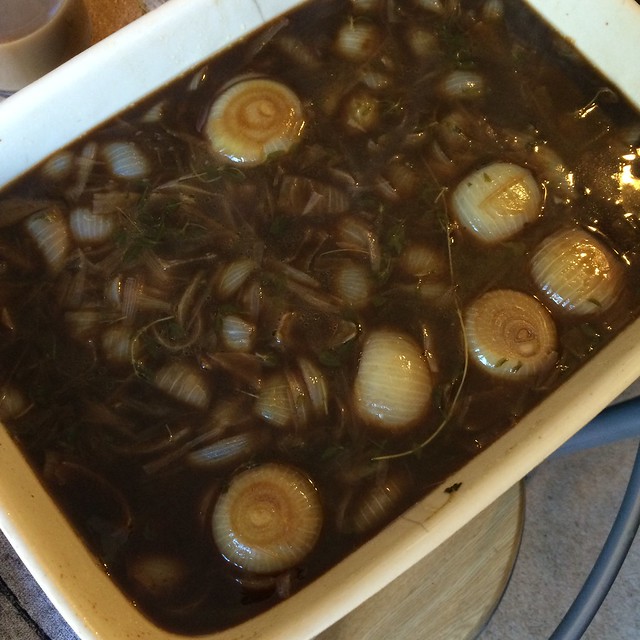 The onions in gravy were another awesome addition – you can either keep these quite liquidy as in the photo above, which makes a kind of side dish, or thicken them up to make more of a sauce. Either way they’re very tasty! 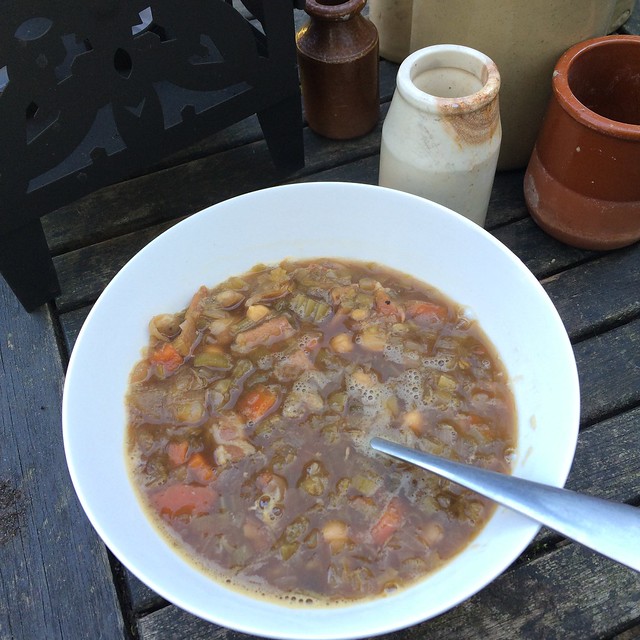 The beef and bacon pie (top) was as good as you would imagine, but the bean and bacon soup was a surprising standout for me – addictive, rich and savoury, this would make an excellent meal all by itself! 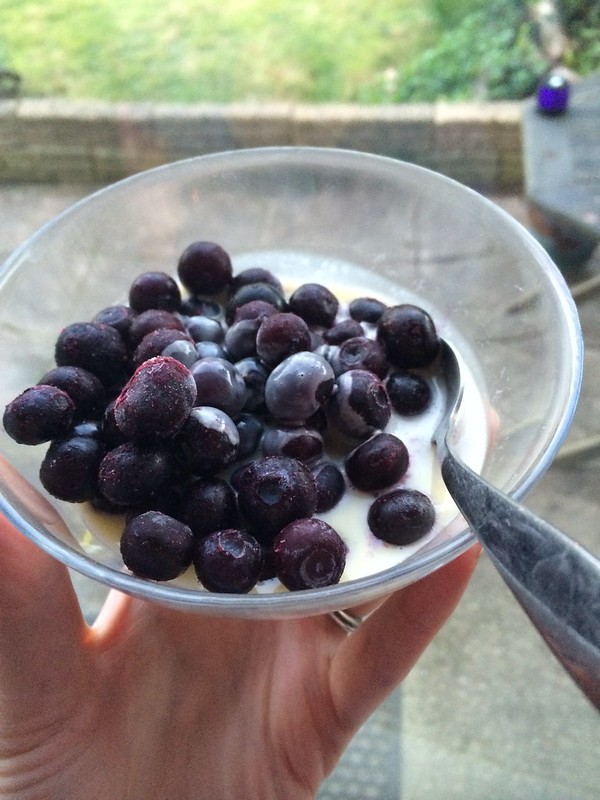 For puddings, I was really excited to try the iced blueberries in sweet cream (after having the similar dessert dish at The Ivy earlier this year), and it didn’t disappoint, although I did attempt to serve it with the sauce hot and the berries iced – which didn’t work all that well as the sauce cooled almost instantly. It was still good without the temperature difference anyway! 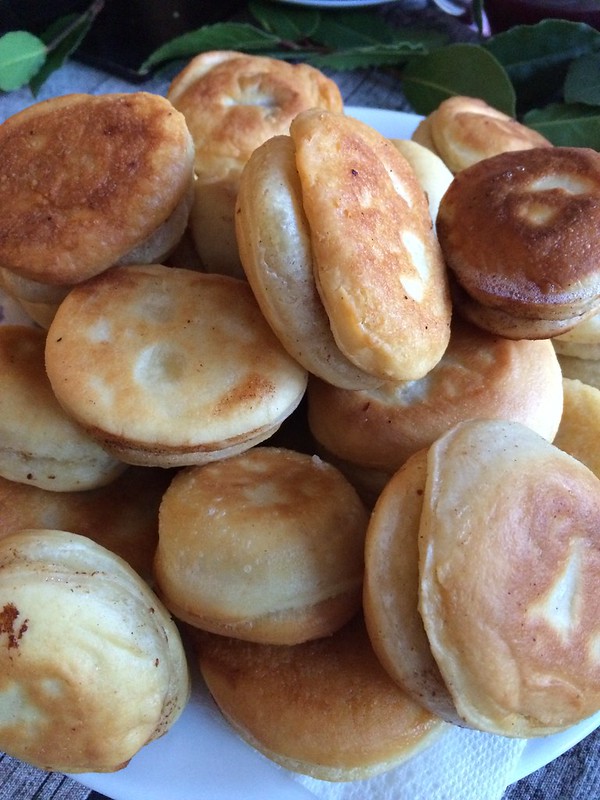 The Medieval applecakes were a bit tricky to make, as they involved making a yeast dough which then had to be cut into rounds and filled with apple, honey, cinnamon and nuts, and shallow fried. It also calls for poudre forte, which has the one specialist ingredient which might be difficult to track down – grains of paradise. A bit like a scented, floral peppercorn, grains of paradise are well worth seeking out online or in a specialist grocers, because of their incredible, unusual flavour. I’ll probably do a post on them later! Anyway, the applecakes are just as you might imagine – addictive, hot, crispy, fried, fluffy little parcels of sweet and tart fruit, definitely worth the effort. However, you’ll probably find it tricky to serve these hot for your guests as part of a buffet, unless you want to be standing over a stove when everyone’s having fun. We fried these up later in the day when everyone got peckish again and were happy to stand around in the kitchen and snatch them, piping hot from the stove. 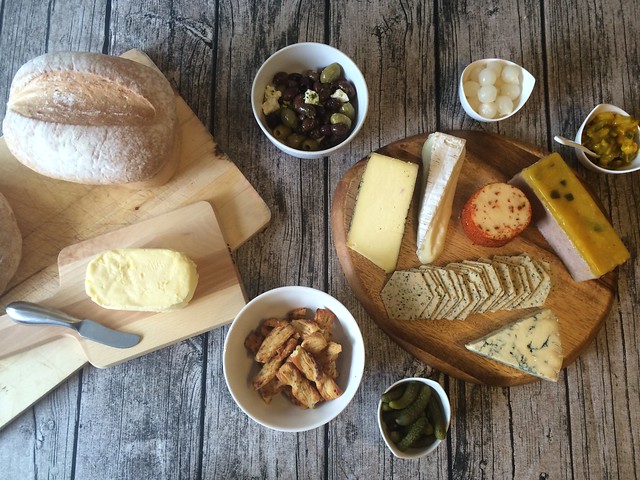 Of course, if you don’t want to go the whole hog for a GoT party, I have a few ideas for a more relaxed affair. I used these for my Father’s Day special dinner, which gave the feel of a meal from Westeros, but didn’t rely on as many dishes or recipes from the book, leaving you free to enjoy your company and relax. 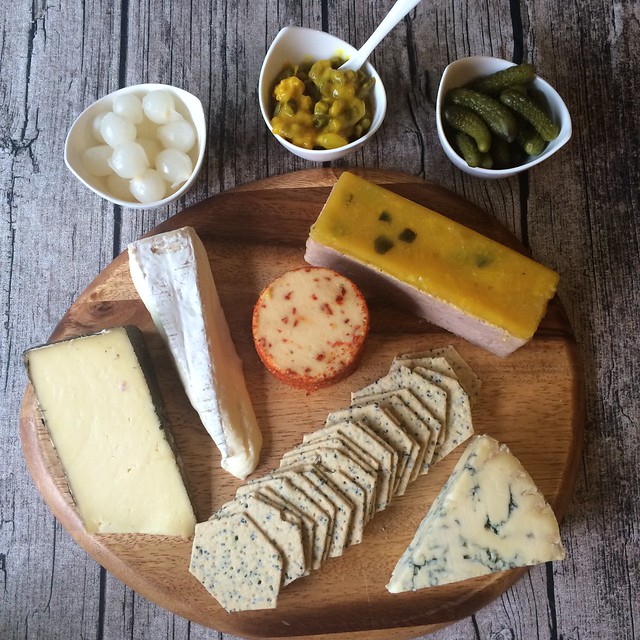 First of all, a cheese and pate board, with pickles and fresh crusty bread, is a fantastic way to start out. For a special occasion, you can splash out with a terrine – I bought mine in from Marks and Spencer. 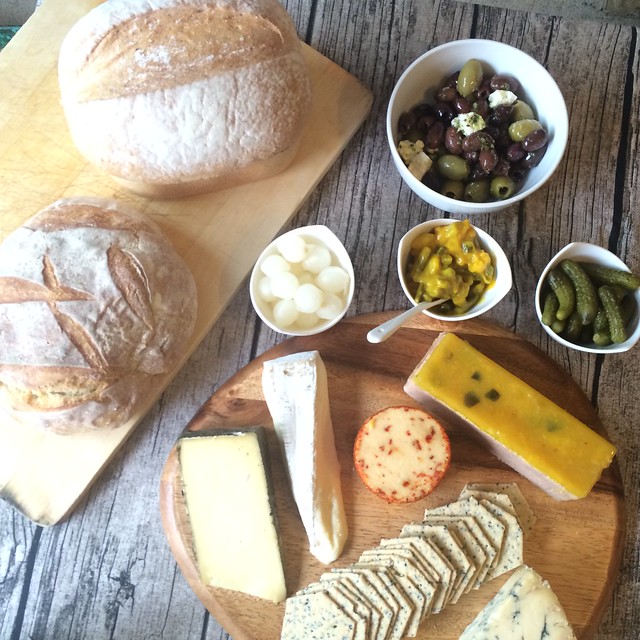 I also bought the main joint of pork from Marks as well, which made the centrepiece of the main meal – an adapted traditional roast dinner (my dad’s a fan, what can I say?), which I think works perfectly with the Game of Thrones theme. 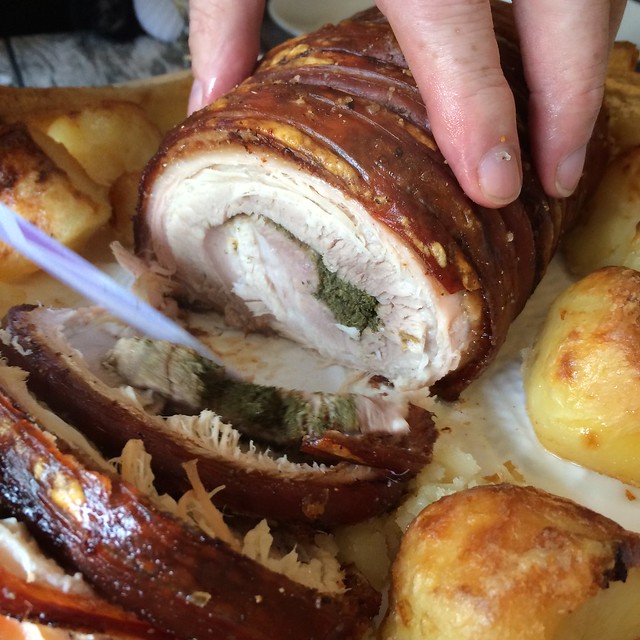 Our lunch consisted of the pork, the aforementioned onions in gravy, the sauce from the roasted boar recipe, buttered carrots, roasted parsnips and potatoes. The last two are probably controversial additions, because there aren’t any potatoes mentioned in the Song of Ice and Fire books. This is probably as Westeros is loosely based on Medieval Europe, and obviously potatoes were yet to make an appearance from the New World. However, in the show, they’ve definitely mentioned potatoes, so I’m using that as my reasoning. Plus, my dad loves roast potatoes, and it’s his darn party. 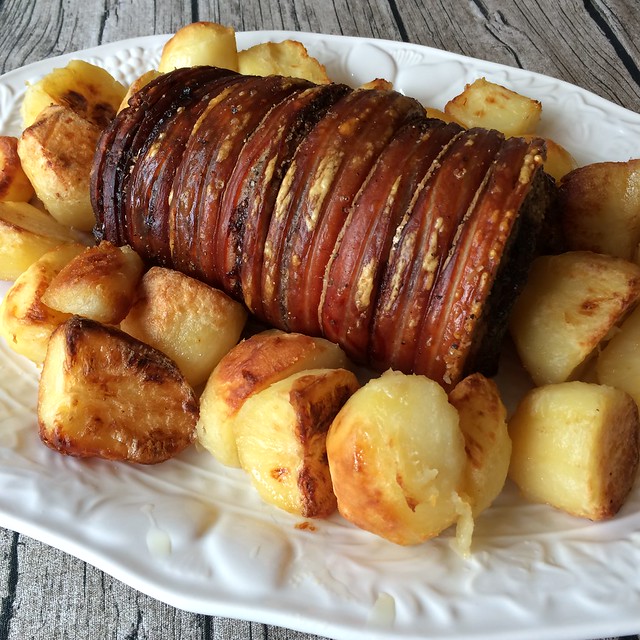 For pudding, I made a blueberry tart from Dirty The Kitchen’s recipe. I could make up a cool reason for why I did this, but what happened was my mum borrowed the AFOIAF recipe book, so I Googled ‘Game of Thrones blueberry tart recipe’ and found that one. 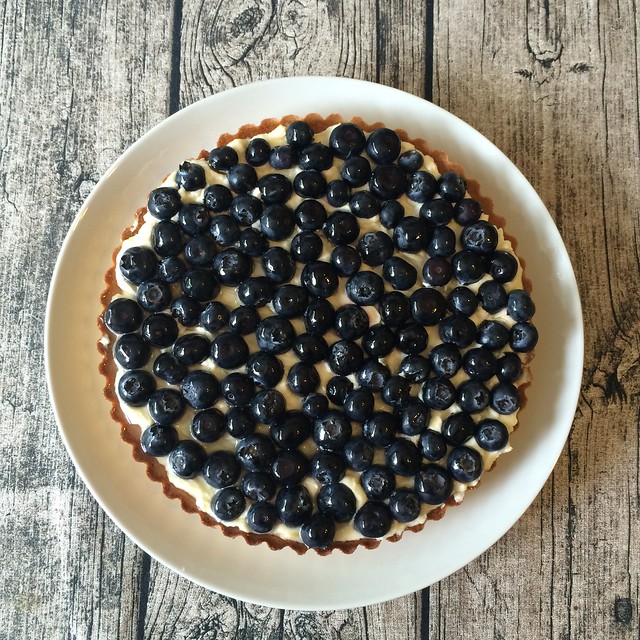 It’s delicious, I highly recommend it – although I cheated and used a premade sweet pastry base from Waitrose. Filled with creamy, sweet mascarpone and lemon zest, and topped with fresh blueberries and a sweet lemon glaze, it made the perfect summer tart for the end of a delicious lunch. 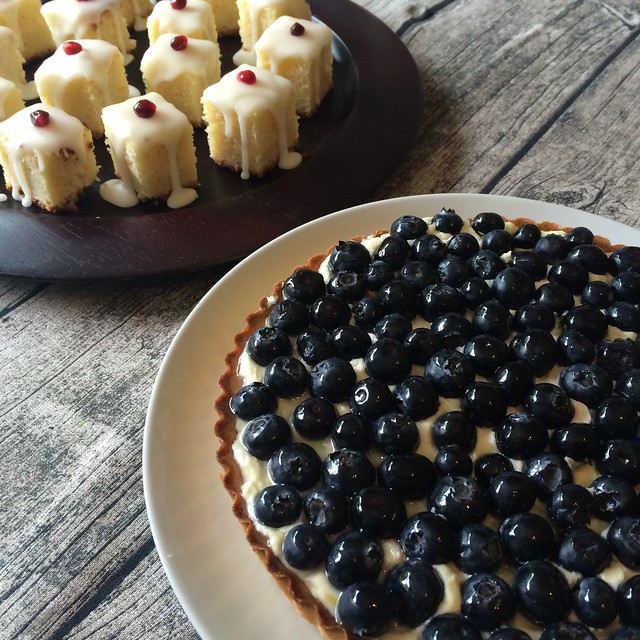 I also tried my hand at modern lemon cakes from the recipe book, while my mum made some of the medieval ones, which turned out to be more like biscuits. The modern lemon cakes were a simple tray baked lemon sponge cake, cut into squares and drizzled with an icing made of icing sugar, lemon juice and butter, topped with pomegranate seeds. 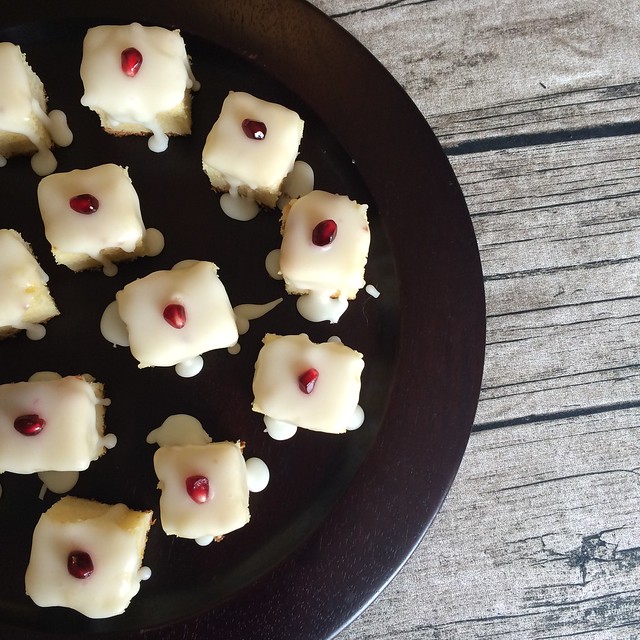 The Medieval cakes were great – like biscuits or cookies, chewy on the inside and crispy around the edges, with a hint of a tart lemon drizzle on the top. 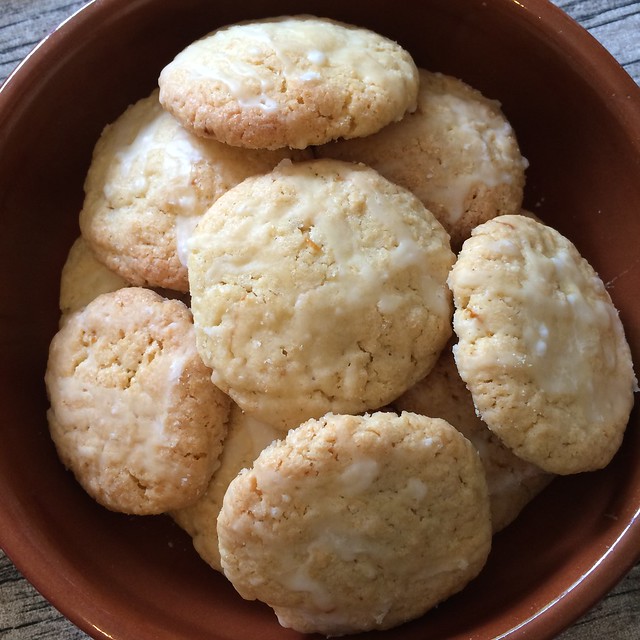 So, that covers the food (just about… right?) – but what the heck do you do with your guests, besides group them into factions of people who have read the books, and people who haven’t, to talk about GoT theories and cast smug looks when people mention characters you know are going to die? Well, if your friends are creative and don’t mind harkening back to their childhood days, you might like to invite them to create their own house sigils! 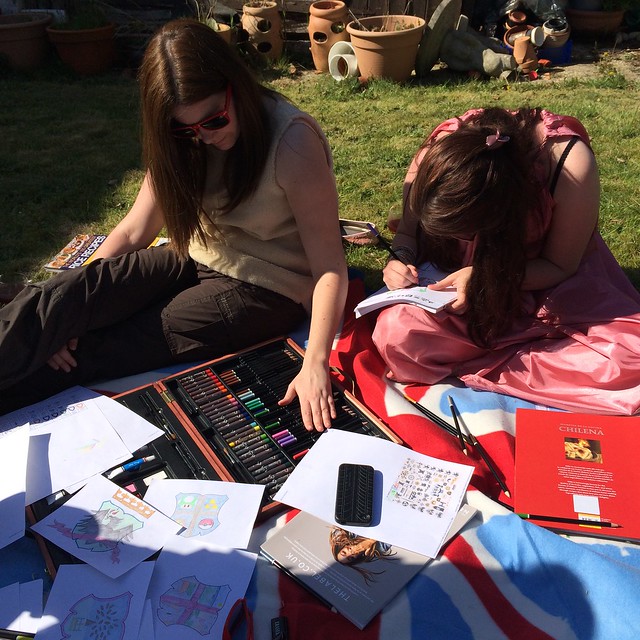 You’ll need paper, art supplies, and some shield templates, which can be found easily online. It’s also a good idea to print out some heraldry motifs and designs to help get those creative juices flowing… 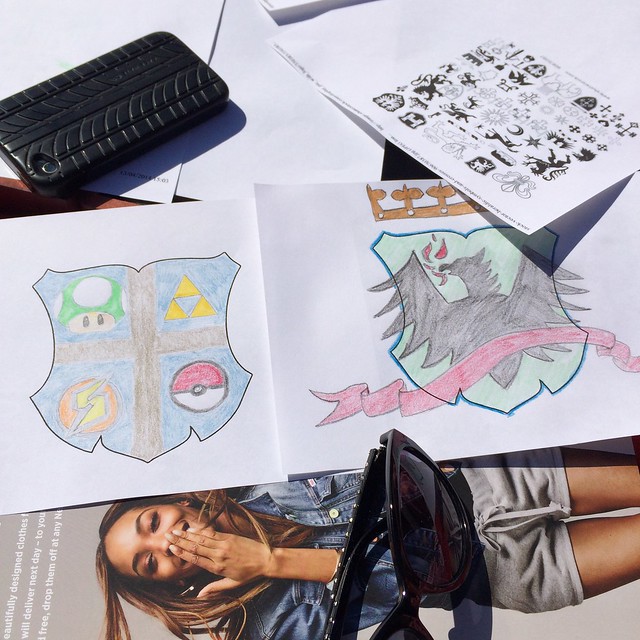 The good thing about this game is that not everyone needs to be fully up on GoT to join in! The same with ‘pin the head on the Direwolf’ – just print out a large drawing of a wolf and invite your guests to pin the head on blindfolded. You could also try purchasing outdoor archery kits (also great fun for Hunger Games parties!) and get your guests to do their Night’s Watch yard drills.

Finally, if all your guests are GoT fans, there’s always the classic Who Am I game, where your guests have a character’s name written on a piece of paper on their forehead, and have to guess who they are based on questions with only the answers ‘yes’ or ‘no’. There are loads of variations of the rules for this game, but at its essence it’s that simple… 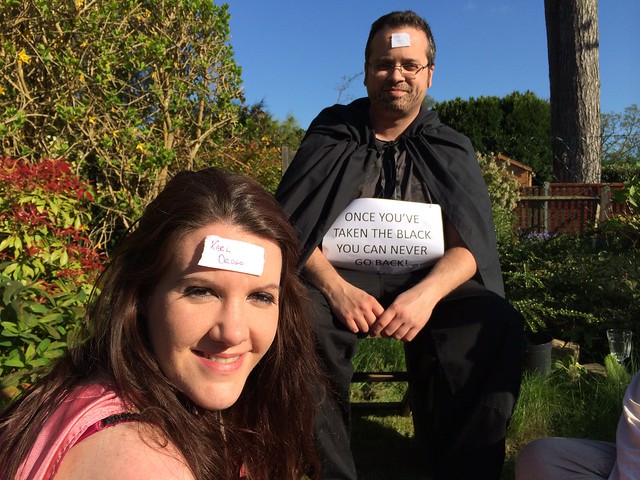 Of course, you’ll have to make sure that all your guests know not to include spoilers in their guesses… and if you’re playing with show fans, the spellings can sometimes be a little off…

Anyway, I hope that gave you a few ideas if you’re planning your own GoT party! Let me know whether you had a celebration for the finale – and whether you cooked up anything fancy. And if you have any ideas for food, costumes, decoration or games, please share them in the comments section! 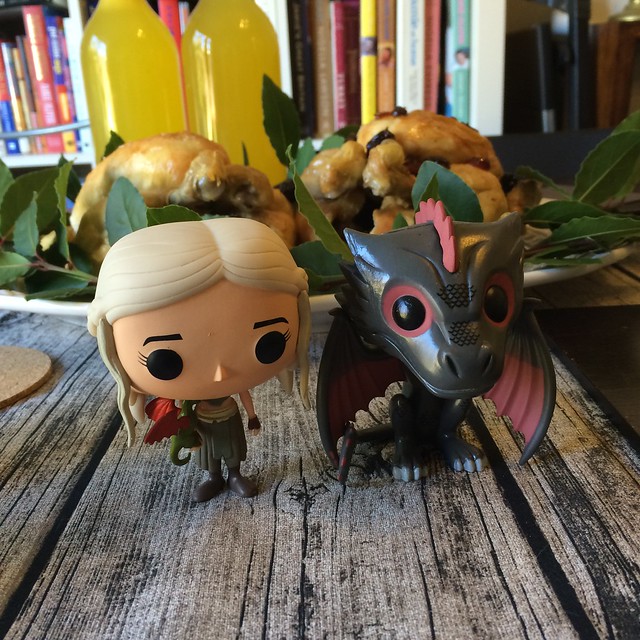 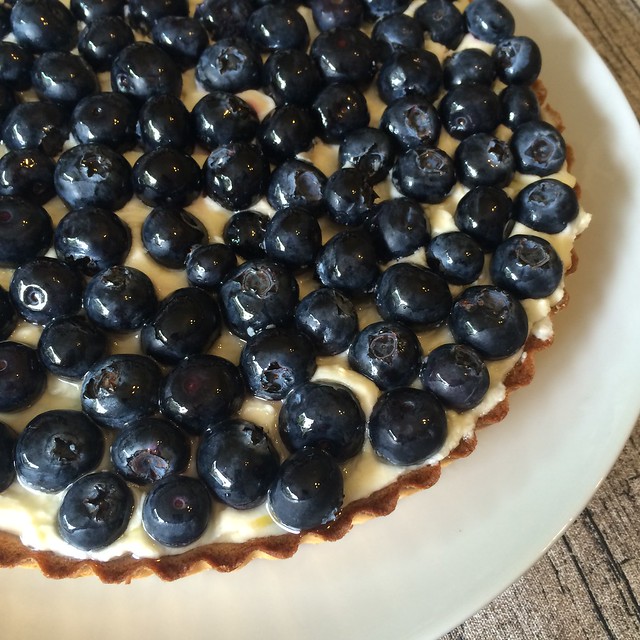 One thought on “A Feast of Ice & Fire: recipes, games, decor and ideas for your Game of Thrones Finale Party”